The game menu is only accessible outside of combat, and is where you manage your characters. The left side of the screen will show statistics for the currently selected character, while the right side will show the character's currently equipped gear, with the character model in the centre. Below is a row of icons representing the functions available to the player, such as viewing inventory items, changing equipment, assigning skill points, changing game options, etc.

Bringing up the game menu will blur the game screen, then pause the game as the menu appears. You may still cycle through the characters currently in the party, although when exiting the game menu, you will be returned to the character under control when you originally brought the menu up.

The menu screen is divided into four sections; three vertical columns from left to right, and a strip of icons along the bottom of the screen. 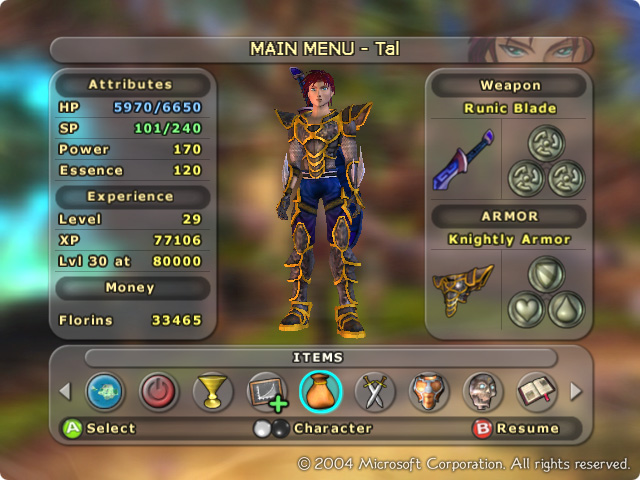 This is a 3D model of the character, with the weapon and armor currently equipped also displayed.

The bottom section of the game menu interface is a row of command icons for the player to use. In order, they are:

There are three sections in the maps:

This will pop up a dialog box with three options:

This section allows you to view the items you have collected during your journey. They are divided into three different lists:

This is where you go to distribute skill points gained from leveling up for the current character. Skill points are shared between both statistics as well as skills. There are four attributes which can be improved:

This brings up the player's inventory of potions and salves, i.e. usable items. Here is also where you set the four items which you wish to hotkey for quick access.

This brings up the list of the weapons the current character is carrying, as well as what runes are inscribed on them. You may view additional flavour text about each weapon by highlighting it and pressing F3. If you press enter, the character will change his current weapon to the one being highlighted.

You can also change the current character's weapon via the quick menu, or by using the mouse scrollwheel during combat.

This shows what armor the character is wearing, as well as what runes are inscribed on it. Unlike weapons, each character only has one set of armour. Any upgrades obtained during the course of the game will automatically overwrite the previous armour.

This is a list of monsters which the player has encountered. The player may use the up / down movement keys to highlight a particular monster, which will cause the game to display a picture of the monster as well as a brief description of it. Some monster descriptions include hints on their weaknesses.

In the quest log you will find the list of currently active quests. Highlighting a quest will give a brief description on what is needed to complete it. When the player finishes a quest, it will be removed from the quest log.

For more information, visit the Walkthrough or Side Quests pages.

Retrieved from "https://sudeki.fandom.com/wiki/Game_Menu?oldid=3426"
Community content is available under CC-BY-SA unless otherwise noted.