A blacksmith resides in almost all townships and residential areas within Sudeki. They are capable of altering armor and can also be paid to engrave weapons with rune enchantments that aid the characters in combat.

For more information about what weapons are available for use, see the Weapons or Armor pages.. 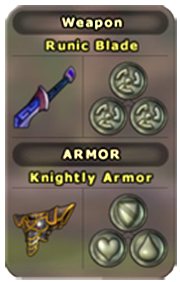 The more powerful the upgrade, the more expensive the rune is to inscribe. Several weapons will fall into the character's hands with a magic rune that has been permanently inscribed; these runes will inflict negative status effects on enemies (such as Poison, Slow, Curse, or Weaken). Unlike all other rune slots, these status effect runes cannot be removed or changed. However, all other rune slots are available for customisation.

Throughout the game, the player may find Scrolls which a blacksmith can read and follow to augment a weapon or piece of armour with a rune.

The more powerful runes are the Circle runes, which are attainable later in the game when the player finds its corresponding scroll.

Illumina Castle: The Illumina Castle blacksmith forges armor and weapons for the soldiers of the Elite Guard. He can be found near the entrance to the training yard, beside Ailish's Tower.

Shadani-Mo: Raku-Li Bual operates a weaponsmith's forge on the side of the storage tent. His workspace is one of the first tents visitors will encounter when they enter Shadani-Mo through the Illumina Countryside route.

Transentia: Jacob, or 'Nuts', runs a weaponsmith's on City Level 1 in Transentia. His workspace is just outside the elevator entrance when you arrive in Transentia by air from Rivet Point.

Crystal Reef: Stanton Russo owns a weaponsmith's in the main square at the bottom of the hill. It is in the same location as the blacksmith in New Brightwater, except it is up the stairs instead of beside them.

Cyantine Citadel: The Citadel blacksmith remains loyal to Kazel and his troops. He can be found at the far end of Caprine's Gardens in Cyantine.

Retrieved from "https://sudeki.fandom.com/wiki/Blacksmith?oldid=3514"
Community content is available under CC-BY-SA unless otherwise noted.